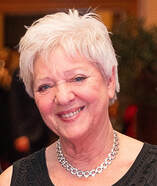 Director
​Pilgrim Reception Team
Margaret has a BA Honours in Medieval History, and a Phd  in Shakespeare  Studies studies. She has also been a guest lecturer for The Open University and holds a degree in Psychology.
​
Originally born in the Midlands, in the worst snow storm in living memory. Margaret spent many of her working years in the Fashion business, working all over the UK.

As retail Operations Manager for Next, she also spent time working with the overseas franchises. Following early retirement in 1990, Margaret joined English Heritage as Historic Properties Manager, responsible for visitors services for the manned and unmanned properties within the five counties. She appeared, on behalf of English Heritage  in several media programmes, both radio and TV and was a registered speaker with both English Heritage and National Trust

In 2003 she trained as a psychotherapist working as both a trustee and volunteer with West Leicestershire Mind.  In this capacity working as a volunteer with UNICF in Nepal for two months of the year. At the death of her partner she relocated to Glastonbury and immediately was drawn to work with the Centre and the Pilgrim Reception Team. Her tireless efforts are much appreciated.