Download File
In the Middle Ages, the great abbey of Glastonbury was acknowledged as a powerful centre of academic and spiritual activity with a magnificent library, a school and links with the universities and political power in London.

After the Dissolution of the Monasteries, a long period of inactivity followed until the early part of the Twentieth Century when interest in Glastonbury as a special spiritual place revived with well-known personalities, such as Dion Fortune and Rutland Boughton establishing themselves in the town.

Some of our past talks 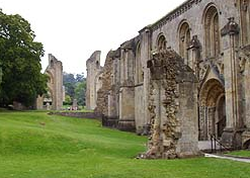