History of the Glastonbury Unity Candle 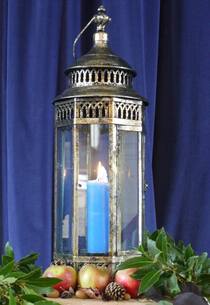 The candles are made by Starchild, right here in the heart of Glastonbury. Each candle is charged with a unique infusion made with herbs, trees and flowers including the Glastonbury Thorn, and collected in tune with the cycles of the moon from various sites in and around Glastonbury.

Blue was chosen because there is a deep spiritual significance to it and is seen in many cultures and beliefs representing faith, devotion, peace, inner knowledge, love, tranquility and harmony.

Since then, the Candle has visited hundreds of events and, in its familiar lantern, has been taken to ceremonies and events of all kinds, attending churches, temples and sacred venues, weddings, anniversaries, christenings, funerals, talks, workshops, conferences, civic events, festivals and concerts. Visit the Unity Candle's Facebook page and find out where it has been.

Each host lights it in a way that is appropriate to them, so they are personally and energetically engaged in the process of igniting not only the flame of the Candle, but their own inner flame and reminded that peace and understanding starts within. It also stands on the Glastonbury Town Council table every month, where, all members of the council and public are asked to stand and, following its lighting, observe a Minute’s Silence.​
Why blue?

There is a deep spiritual significance to the colour blue and is believed by many to represent faith, devotion, peace, inner knowledge, love, tranquility and harmony. In many cultures and beliefs, blue is considered a sacred colour and so it has been chosen here to represent Glastonbury and its special qualities. ​

Exclusively made for Glastonbury Pilgrim Reception Centre, in the heart of Glastonbury, by Starchild. Each candle is infused with the nature of Glastonbury  flowers, herbs and trees, including the world-famous Holy Thorn.  These are gathered in and around Glastonbury during the cycles of the moon.