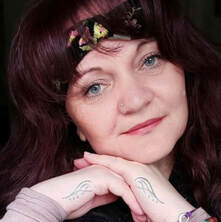 Can you tell us about your connection to Glastonbury?
I first visited Glastonbury in 2002. It was a short trip to England and little did I know that I was going to move to Somerset in 2018. I instantly loved the countryside and everything this beautiful county has to offer. During the first lockdown I began to explore the countryside around Glastonbury, I was up and down the Tor on a daily basis, sometimes even twice a day. I found my way to Barrow Mump and other sacred places, and before I knew it Glastonbury was in my heart.

When did you first become aware of the Glastonbury Unity Candle?
April 2021. I was at the Pilgrim Centre helping other volunteers with preparations to reopen after the lockdown. When I saw the candle I knew it was very special. Morgana explained more and I was allowed to light it for the first time. The honour and privilege I felt when I lit the candle for the very first time is still present every time I light it again.

Have you had any special experiences with the Unity Candle that you can share with us?
Each time I host the Silent minute for Peace and Unity it is a special experience. I also walked with Morgana when she carried the Candle during the Major's parade and I had the honour to carry it myself on two different occasions.

Can you tell us a little about your background?
I was born in Slovenia, a small country on the sunny side of the Alps. My older sister moved to Switzerland, which gave me an opportunity to travel around Europe with her and her family from a young age. I studied marketing and economics, and before I moved to England in 2003, I worked at the second largest exhibition centre in Central Europe in the head office. When I got my children I decided to stay at home and dedicate my time to my family. When my youngest went to school, I began to work at a local nursery where I had an opportunity to do a child development course and worked as an Early Years Educator for nearly 10 years.

What does the Candle personally mean to you?
It's all about the Light which symbolises Life, Wisdom and Hope. It lights up the darkness in our lives and helps us to connect with the present moment.

Where in the world are you live-steaming from?
A small village east of Glastonbury.

Can you tell us a little about your special interests?
I love spending time in nature, watching the horizon, catching sunsets and sunrises with my camera. I love smelling the ocean breeze and playing on my Native American style flute.

What does being an Ambassador and hosting the Silent Minute mean to you?
It is such an honour to represent the Glastonbury Unity Candle and to be of service of Light.

There is no power on earth that can withstand the cooperation on spiritual levels of men & women​ of goodwill everywhere.
​
Wellesley Tudor-Pole OBE (23 April 1884 – 13 September 1968)
Find out how to join Irena and other ambassadors
​
The Glastonbury Unity Candle
​and the Silent Minute for Peace