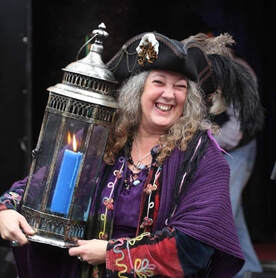 Morgana has been working with the Glastonbury Unity Candle since its inception in 2010. Here she tells us a little about herself and what the Unity Candle means to her.

Can you tell us about your connection to Glastonbury?
I first visited in 1998, Glastonbury not having registered on my radar until then. Much to my surprise, in October 1999, and after only two visits, I moved to a nearby village, never having thought I would leave my beloved Yorkshire. Glastonbury had a very strange  'pull' and resistance was futile!

When did the idea of the Glastonbury Unity Candle develop?
After the Pilgrim Reception Centre opened in 2008, I'd been getting nudges from 'upstairs' to create something that might symbolise the diversity in Glastonbury. I was amazed at how many different paths and beliefs there were in one small town, every one of them shining their own light, their own truths.

In their quiet, unique way, candles radiate messages of  warmth, hope, connection, spirituality, mystery, to name just a few, and they are literally a burning example that the whole is more than sum of its parts - just like Glastonbury. Deeply rooted in almost every religious and spiritual practice, there is something very symbolic in a solitary flame and the aura of light that emanates outwardly as it communicates with our souls, speaking to us beyond words. It is the Unspeakable that dwells amid the candle flame. It enlightens, enlivens, inspires, comforts, and ultimately connects. No matter how thick the darkness, the light of one candle vanquishes it.

Working with Starchild of Glastonbury, we developed the tall, slim Unity Candle, imbued with herbs, trees and flowers, including the Glastonbury Thorn. We chose blue as the colour, often seen in many cultures and beliefs to represent faith, devotion, peace, inner knowledge, love, tranquility and harmony. It was first lit in a simple ceremony in the Pilgrim Reception Centre in 2010. It was originally named as the Glastonbury Candle. But following our 2012 Unity event, it become known as the Unity Candle.

Have you had any special experiences with the Unity Candle that you can share with us?
So many experiences! Over the years I have been very blessed to have been invited to take part in hundreds of ceremonies and events. There are lots of photos on the Candle's Facebook page if you want to explore! I think if I could only take one thing away from all my experiences is how my awareness, understanding and acceptance of different beliefs has expanded, even if they don't personally work for me.  Every time I ignite the flame, I feel connected to all those who have lit it before. It is an awe-some feeling of connection and love and it constantly prompts me to put aside judgement and simply listen.

Can you tell us a little about your background?
I was born in Yorkshire and the landscape there was an integral part of my being, especially the forests, rivers, stones and moors. I grew  up in a Yorkshire newspaper publishing and printing environment which was managed and run by three generations of my Methodist family. Early memories include being able to start the press run for the weekly newspaper, usually around 2am, and attending events and happenings as a ‘junior reporter’ at my father’s side. My interest in fact-finding and research perhaps grew from these early beginnings. Dad was also very involved with many voluntary community projects and I think there might have been a bit of an influence there!

What does the Candle personally mean to you?
It might be 'just a candle' but to me it is imbued with the spirit of our humanity and the spark of divinity, connecting us to our higher selves.  It reminds me how we are all just facets of the One and how together, we are capable of so much more than we might believe.

Can you tell us a little about your special interests?
​Since a young teen, I have been drawn to the mysteries, the esoteric and the arcane.  My down-to-earth sense of humour has often got me into trouble in highfalutin circles and I  might have to use Leonard Cohen's words here..."I've studied deeply in the philosophies and the religions, but cheerfulness kept breaking through." I especially enjoy being out on the land, in the wild places where nature dominates, but recent health challenges have made that increasingly difficult for me.

What does being an Ambassador and hosting the Silent Minute mean to you?
It is a privilege and a honour to share the light of communion and community with so many people from around the world.

There is no power on earth that can withstand the cooperation on spiritual levels of men & women​ of goodwill everywhere.
​
Wellesley Tudor-Pole OBE (23 April 1884 – 13 September 1968)
Find out how to join Morgana and other ambassadors
​
The Glastonbury Unity Candle
​and the Silent Minute for Peace