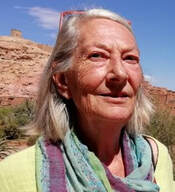 Director
​Pilgrim Reception Team
Caroline's professional life began in the early 80's when she began training as a McTimoney Chiropractor in the days when there were less than 50 practitioners in the UK.  Asked to be a student teacher, she taught there for over 8 years, eventually became a director of the School for three years. Concurrently she ran her own busy practice, continuing until retiring in 2010. During her working life, she became  aware of other factors involved in peoples’ recovery and consequently studied with the College of Healing, again eventually becoming a tutor and running their course at a local F E College.

Determined to understand more, for 7 years she went on twice yearly retreats to a remote Orcadian island, initially believing she was “learning to heal others.”  It turned out to be a very intense period of self-discovery and self-healing. After a time of gradually learning to “parent” her mother during her last years, and finding the changing relationship frustrating, she became exhausted having to deal with bureaucracy.  A friend highly recommended a workshop which happened to be in Glastonbury over New Year 2012.
​
Totally unexpectedly, 9 months later, she found herself living in Glastonbury.  For the first twelve months, she resisted  the offers to become a shaman, druid, etc whilst wondering “What next?”  She discovered the Pilgrim Reception Centre, and Morgana’s vision, the main attraction being the total inclusivity, and since then has worked tirelessly to support the Pilgrim Reception Team, keeping it going through challenging times and thoroughly enjoys welcoming and supporting the visitors to the town.